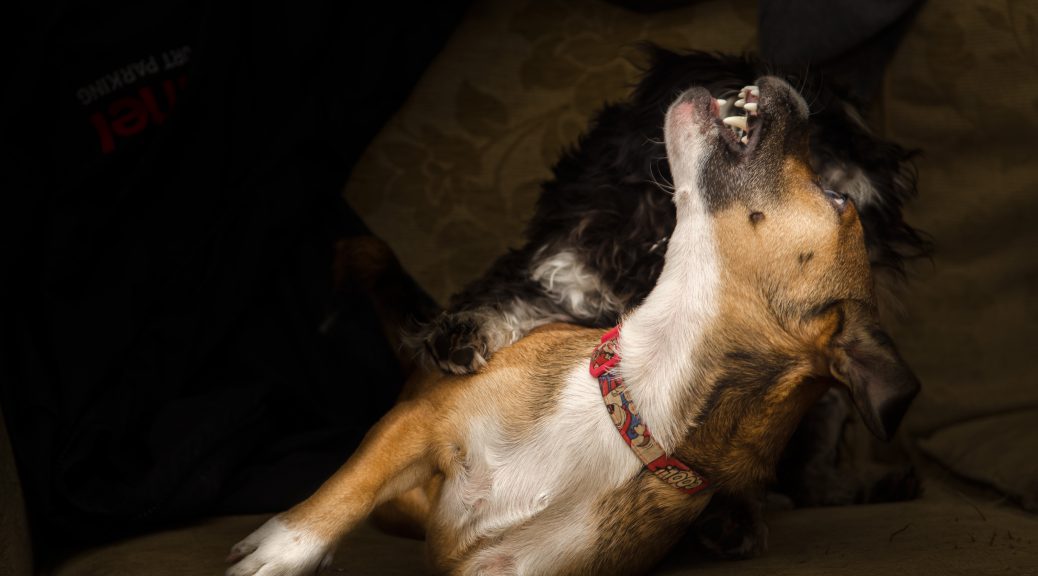 I’ve complained before about my dog, that she’s.. shall we say.. resistant to having her photo taken. She’s remarkably adept at dodging the lens. Well, this week things changed a little, and I had a lot of fun.

My neighbours were away working this week and needed help to make sure their two dogs – a Jack Russel and a Miniature Schnauzer – were fed, watered and walked. I’m a dog lover anyway, which is why I have Maisie, but these two boys, on an entirely different level, are a joy to behold. They’re excited and excitable, interested in everything, and most of all they’re self-entertaining. It’s no effort to sit them, because they constantly play together and wear each other out. But for a photographer they provide the ultimate benefit: Target practice!

Honestly, there’s no greater gift for a week than a couple of attractive dogs who don’t run and hide when you get a camera out. Not that they make photographing them easy, mind you. They’re active and curious. Unlike Maisie, Ruari and Freddy are more likely to get too close to focus, but that’s part of the fun. They at least don’t make you feel like you’re imposing on them. Maisie does, and it’s surprising how guilty she makes me feel when I’m pursuing her for a shot.

With it being Easter and a long weekend, Ruari and Freddy’s mum and dad have now (at time of writing) headed away for the long weekend to visit relatives and they’ve taken the boys with them. At least I have the option to borrow them from time to time, when I’m desperate to fire off some pet photos.

Freddy is due to get a haircut soon, so I’ll do some before/after photos. I rather like his shaggy look, but it would be nice to be able to capture his eyes. Eyes are so important in portrait photography, although with long-haired dogs you can get away without capturing them.

Until this week, Freddy was a little wary of me, as apparently he is of all strangers, but after the first day any issue evaporated and he and I have become best buds. I’m sure most animal lovers will identify with the fear of rejection. We have to remind ourselves that it isn’t necessarily personal, and we have to remember that dogs are particularly sensitive to bad experiences. Our need to have our affection reciprocated is a powerful thing, though.

Ruari’s tremendous fun and I could take photos of him all day. And, unlike Maisie, he’d let me! Ruari doesn’t usually like men, particularly grey haired ones and large ones. I haven’t gone grey yet but I am a big bloke. For some reason, despite this, Ruari has always loved me. It’s always been a bit of a mystery to everyone, but I think it’s probably because Ruari knows he’s safe with me. Ruari’s come to stay a few times in the last few months and so now he settles in comfortably straight away. He often falls asleep in my arms without a care in the world.

You may have noticed that Ruari is one of those three-legged dogs. For the record, this doesn’t slow him down at all in any way. In fact Ruari, when on the lead, pulls as hard as Maisie ever did, despite being one quarter the size, one eighth the weight and with only three quarters the number of legs. I think it’s a fairly common trait of Jack Russels, that they are bloody-minded in their determination to do whatever it is they want to do. The plus side is that they eventually wear out, resulting in a little bit of peace and quiet every now and again.

All in all I had a fabulous week with these two. Although Maisie, being a little older, occasionally took herself to the bathroom and closed the door behind herself to get away, by and large I think she also enjoyed their company. The bottom line, though, is that as well as being happiest when not photographed, Maisie is also happiest as an only dog with one hundred percent of the available attention being on her. Still, I think some additional doggy company every now and again really does do her good.