Okay Google, set an alarm for two AM.

Two in the morning is a toughy but Glenn and I had committed to an “East Coaster”, and getting to Bempton Cliffs on the East coast for about 5am. And so a 2am start for me was what was necessary. As is almost always the case, the knowledge that I had to be up very early kept me awake.

I snoozed the alarm until 2:15am, which was the absolute limit to get a coffee in me, grab a shower and run through my checklist of things to take before departing Leeds. I still managed to forget Maisie’s collar. I did remember her lead, though!

I left the house at 3:20am, heading to York. Google’s guestimate was to arrive at Glenn’s door at exactly 4:01am. As you’d expect at such an ungodly hour, the roads were quiet. I counted four cars travelling in the opposite direction all the way there. It was like rush-hour during the first lockdown, but in the dark.

Glenn was waiting in the street as I pulled up and after a few minutes we’d loaded the car with his tripod, camera bags and bottle of Coke and we were on our way. Glenn has bought a huge Sigma 150-600mm and wanted to give it a proper test at Bempton, in the hopes that we might spot a puffin or two. 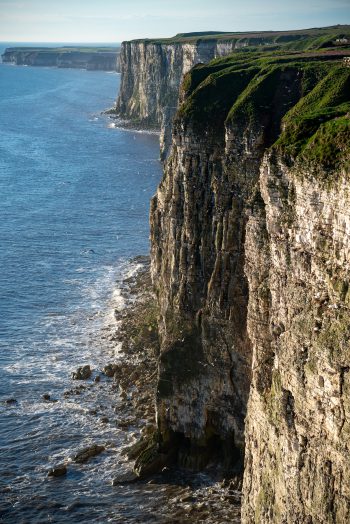 The run to Bempton was smooth, again with next to no traffic in the way. We pulled into the RSPB car park to discover about 6 other cars and a couple of camper vans already on site. The RSPB operates a visitor centre at Bempton Cliffs but the path across the cliffs is a public right of way. Out-of-hours, the gate is open and the path from the car park is unrestricted. We drove around the car park a couple of times looking for a pay-and-display meter but there isn’t one. I’m pretty sure there used to be one but it isn’t there now. So we gathered our things together and set off along the path with Maisie in tow.

This didn’t suit Maisie at all. She’s no interest in bird watching and had no desire whatsoever to walk the distance. She wanted to go back to the car, and so she did. I reversed the car into the corner of the car park, where I felt stood the best chance of remaining in shade as the sun rose higher. Better to be bored in the car for a couple of hours than bored at home for the entire day, I thought.